Prior to The Great Depression, some states (including California) started regulating wage and hour issues at work, even instituting minimum wage requirements. It wasn’t until the administration of Franklin D. Roosevelt that the federal government stepped in. 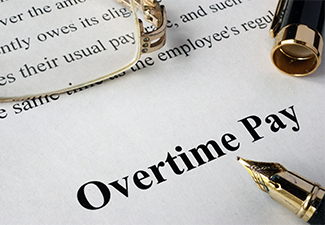 In 1938, Congress and the Roosevelt administration enacted the Fair Labor Standards Act (FLSA), which to this day regulates the basic issues of the workday world. Soon after, they also created the Department of Labor (DOL) to enforce the provisions of the FLSA.

The FLSA established the workweek at 40 hours, instituted a nationwide minimum wage, and guaranteed overtime pay for every hour worked past 40 in a week. Overtime pay was one-and-a-half times the hourly wage of the employee. In those days, virtually no one worked at home, and most punched time clocks.

As work and technology became more sophisticated, however, it became easier for workers to be – voluntarily or involuntarily – lured into working “off the clock.” In the first half-century following the FLSA’s passing, there was really no way to work from home via electronics, but still, off-the-clock violations occurred.

Now, in the aftermath of the pandemic and its lockdowns, more and more people have the capabilities at home to do the same work that they do in the office. Employers might take advantage of this by asking employees to complete projects at home, and then conveniently forget to pay them overtime. Many other examples of off-the-clock work abound.

If you feel you’ve been cheated out of overtime for having performed off-the-clock work in or around Sherman Oaks, California, or nearby in Van Nuys, Northridge, and anywhere in the San Fernando Valley, contact The Sweeney Law Firm, APC. We are dedicated to protecting employees’ rights at work, and we will aim to recover whatever is owed to you for uncompensated off-the-clock work.

The passage of the FLSA and the creation of the DOL allowed room for states to exceed but not undercut the standards of the federal labor laws.

California has long been among the most progressive of states in pushing the envelope on wage-and-hour issues. The statewide minimum wage for businesses with 26 or more employees is now $15 an hour and will rise to $15 an hour for all other businesses on January 1, 2023. Compare that to the federal standard of $7.25 an hour.

California’s overtime rules are also more generous than the federal – and most other states’ – standards. In the Golden State, once an hourly employee works more than eight hours in a day, he or she is entitled to overtime. After 12 hours, the rate rises to double. Further, if an hourly employee is required to work for seven straight days, the first eight hours of the seventh day must be paid at time and a half, and everything after that at double time.

In this age of cell phones and the internet, working at home is often as easily done as in the office. In fact, many employees now enjoy remote work thanks to the pandemic and a new employment reality that set in as a result.

This does not mean, however, that an employer can abuse your rights to overtime by asking you to take something home and “finish it up for tomorrow’s meeting,” and then not pay you overtime. Even if your employer calls you at home with a question, that can be considered overtime work and should be compensated.

Other examples of off-the-clock work include:

Many of these off-the-clock activities are done voluntarily by the employee, but the employer is still required to compensate them for overtime. This means that employers, to avoid overtime they don’t anticipate or authorize, must have standards and policies in place that they enforce. Requiring employees to sign employee handbooks and policy statements concerning overtime should be standard practice, as well as monitoring employee compliance.

Can an Employer Make Me Work Off the Clock?

For their part, if hourly employees are asked to take work home with them or find themselves being contacted at home by their employer with questions or requests, they must make sure that they make clear the time involved is compensable. Both the FLSA and California laws and regulations make it clear that all work done must be compensated.

How The Sweeney Law Firm, APC Can Help

Many employees are hesitant to report wage violations for fear of being retaliated against, for instance, being demoted at work or even terminated for speaking up. That’s why, from the very beginning of your overtime woes, you need to involve an experienced wage and hour issues attorney on your side.

If you’re in Sherman Oaks, California, or anywhere throughout the San Fernando Valley, contact The Sweeney Law Firm, APC. We are here to protect the rights of employees. We will listen to your story, explain your options to you, and then help you regain the money you’ve been illegally denied.

Who Is Entitled to Overtime Pay? Can My Employer Deny FMLA Leave? At-Will Employment in California California Off-the-Clock Work Laws